Is there an explanation? Are they the same thing? However, i knew that Urban Contemporary is a radio format, not a style.

Very good question, thanks for asking.

From an editorial perspective, the terms are virtually interchangeable, but Urban is more a radio format and a chart term, so it's not necessarily a great name for a musical style. We added a style for Contemporary R&B after we added Urban, and several years ago began to phase out Urban from the styles that we assign. You will definitely still see it, but you can basically substitute Contemporary R&B for Urban (and vice versa) wherever you find either of them.

Why does Beta's R&B genre at http://beta.allmusic.com/genre/r-b-ma... include only 3 of the metastyles as subgenres? Why do the styles listed under Beta's subgenre differ from those listed under metastyles?
8 years ago

Hi Rootsmusic,
We've tried to update some of the hierarchies to bring them more up-to-date for 2012. Many of these had not been looked at or updated since the 2004 re-design and we found them to be confusing to a lot of users.

We've tried to lay out these paths in a manner that makes sense to users (but may not be exactly the same as they were on the legacy site). 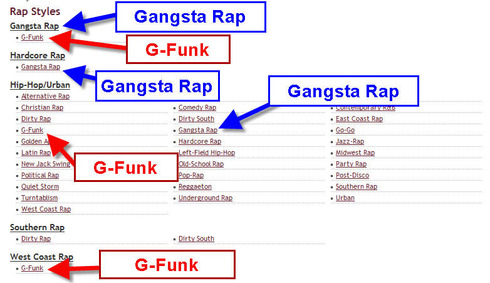 The new version is more of a direct hierarchy with Styles residing within single SubGenres in an effort to guide users to the information about the specific kinds of music they're looking for.

I hope this makes sense. I really hope it does.
8 years ago

Thanks for the answer, Mr. Bush. But at this point, don't you think that the two pages should merge? Also because the two different descriptions may be confusing to users.