lroppy coined the term "boost points" a while ago (a red or green nucleotide put in a loop that lowers the energy of a loop), but since then, thanks to Brourd's insightful puzzles, we have become aware of another way to use nucleotides in the loops.

A "catalyst point" is a U or C that doesn’t seem to lower the energy of a loop in the way a boost point would, yet when placed in a loop, helps solve the puzzle.

Here’s how it works. Sometimes you have a loop that's too big because a bond is not bonding that should be. Here is an attempt at a solution for the puzzle “Simple Single Bond”: 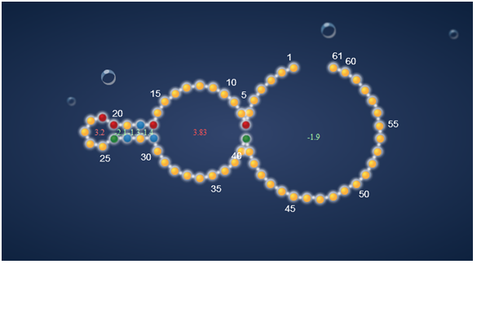 But, this does not solve the puzzle. Here it is in natural mode: 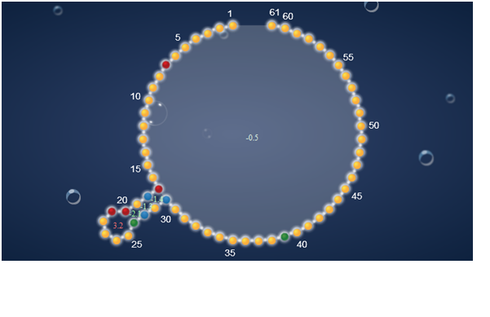 So, how do you raise the energy of the loop? It turns out, a uricil placed at 16 will do the trick: 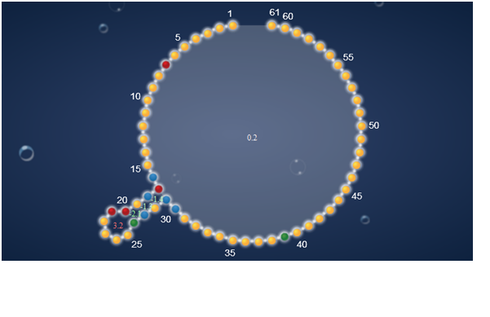 (Note that it is necessary to put a uricil at 30 as well or else 16 will bond with 30). Now, when the shape is in natural mode you can see that the energy of the loop has been raised to 0.2. Here is the shape in target mode at this point: 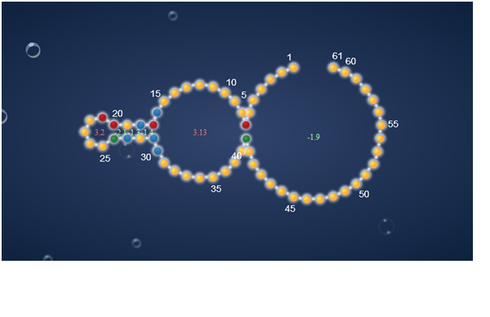 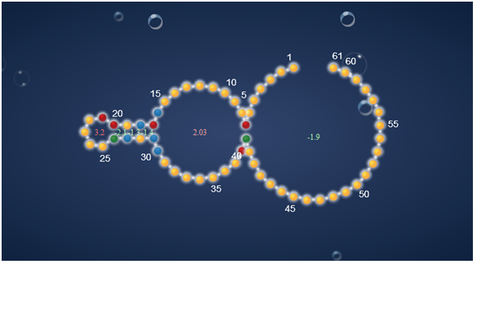 This is really beautiful.
9 years ago

You did an amazing job explaining this Starryjess.
9 years ago

"(Note that it is necessary to put a uricil at 30 as well or else 16 will bond with 30)" Yes, that is one way to look at it, but the Uracil at 30 is also needed anyway to raise the energy of the misfolded loop even further. A C would also raise the energy further.

The reason Uracils are used instead of Cs is because the Uracils are working double duty: they raise the misfolded loop energy yes (slightly more effectively as Cs would), but they also lower the energy of the target loop This kind of double-duty efficiency is very powerful. Every puzzle is solved by encouraging the target shape and discouraging all misfolds. So any mutations that can perform both these functions directly at the same time are worth noting :)

PS I realize this thread is 9 months old, but it seemed like the best place to post this. And I'm sure starryjess knows this stuff twice as well as I do so I hope nobody takes it as me trying to correct it, but rather expanding on it so anyone who goes back to read has a more complete picture why this particular tactic works
2012-06-28T23:44:21+00:00

I think this was a really good way of explaining in two ways to this type of puzzle.
9 years ago

Thanks for your comments. :) Creatine, if you put a C at 16, the energy of the left loop is raised to 2.73 which is still too high to make the bond form. (For this puzzle, anyway. Sometimes C's do work).
8 years ago

This is fantastic work, thank you.
8 years ago

When you started talking the area 16 / 30 I thought you'd jumped the track.
Increase to stabilize? Whoo, yes! :-)
7 years ago

Wow, I wish I had found this thread earlier. Great explanation of catalyst points Starry. It made perfect sense!