Clean halo in multiloop ring or flaws of Vienna

I was going though the new lab data we got from Vienna, when it hit me that I could demonstrate why putting lots of green and red nucleotides in the multiloop ring is a bad idea.

In the latest time I have called G's and C's for high interaction freaks, especially if left alone as single nucleotides somewhere in the structure.

Especially C's want to pair up elsewhere. Something Brourd have noticed.

This is the design from The star lab that inspired me. 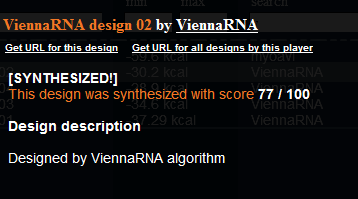 I would like to demonstrate what happens. First I mark all the red nucleotides in the loop. 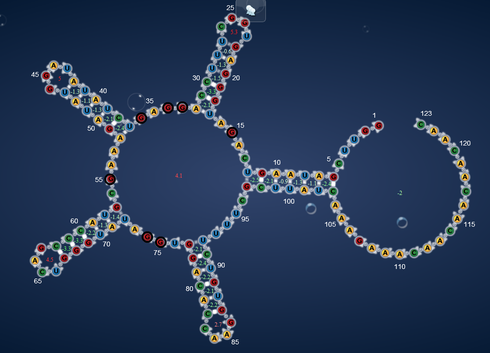 Then I switch to estimate mode. 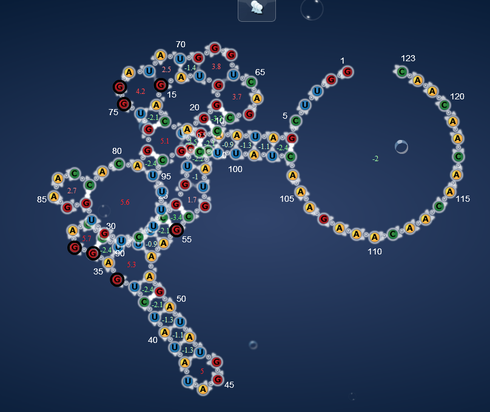 Notice how 3 of the 7 red nucleotides paired up elsewhere – as a basepair. They did not stay in the multiloop. Also it seems they would rather stay in small loops, if not paired up.

Now I mark the green nucleotide. 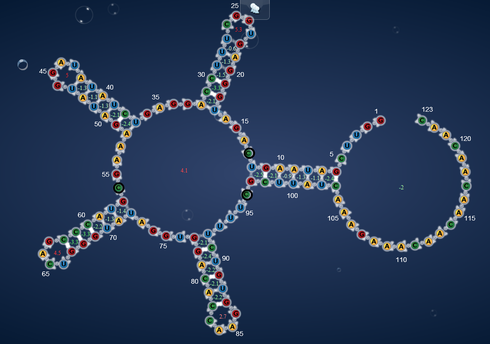 Here is why I call single C's for highly interactive. All of the 3 C's paired up. 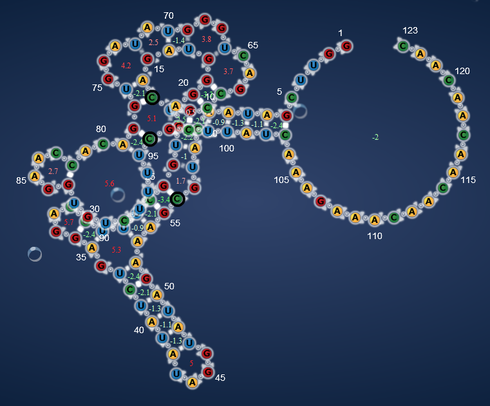 Below I mark both the red and green in the multiloop ring. 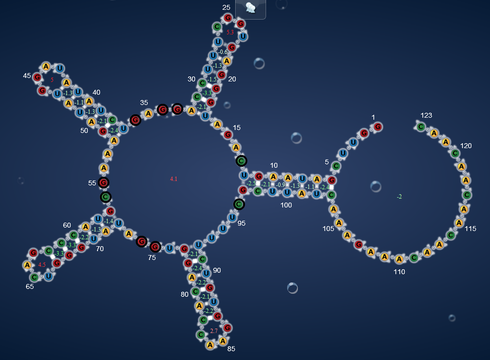 Notice that none of the red and green in the multi ring loop paired up with each other, which means they actually rip the general structure RNA apart. 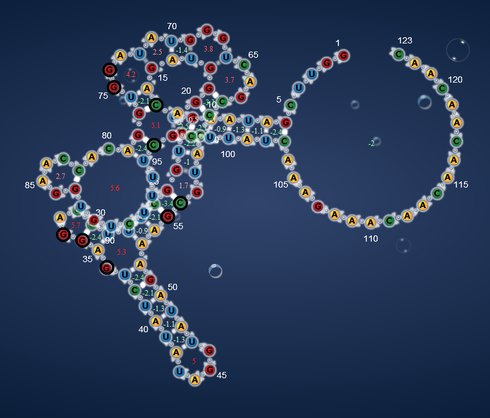 One thing more. It is not just those nucleotides that are outside the boost spot in the multi loop ring, that pair up. Which may explain why using boost points in multiloops regularly failed. Even though at boostpoint spot, red and green nucleotides have a tendency to wander elsewhere.

Now I try with the blue, though they are generally not thought to be so interactive. 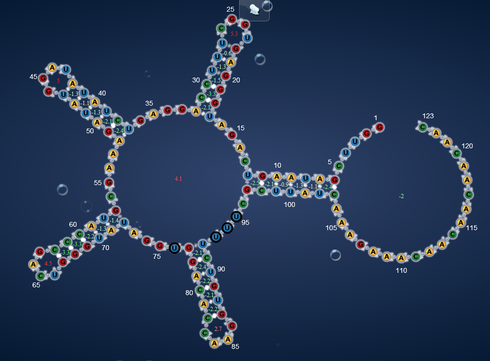 Anyway one of them end pairing up elsewhere. 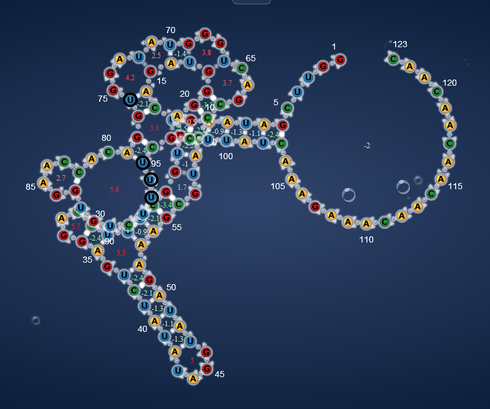 Thanks to Brourd for inspiring me to use highlight to hunt down where nucleotides go when switching between native and target mode when solving a puzzle.

I should mention that this exact fold where you can see what nucleotides pair up with, is just a prediction, and not the way the RNA neccessarily folds in. But this should give you a pretty good idea about what could happen.

Here is the link to the design, if you want to try for yourself. You can highlight a nucleotide by holding down Ctrl and clicking on the nucleotide with the mouse. They are deleted the same way.

I think I just found the explanation on why too many excess colored (red, blue and green) basepairs in loop and multiloop area in lab designs is a problem. Again it was the book Molecular biology that sparked my aha moment.

It was describing chemical reaction in relation to reactants and products. Here is what it says:

Note especially that this is true for binding reactions too. RNA binds up via hydrogen bonds.

What it is basicly saying translated to EteRNA terms is:

Excess reactants (single red, blue and green nucleotides in loops and multiloops without a natural partner) will drive the reaction forward (will be caused to pair up where ever they can, as it is energetically more favorable to them than staying single). That is not in our favor, as they shouldn't pair at all.

By making loops and multiloop ring generally yellow, the least reactive nucleotide, one makes it more likely that loop area do not pair up unwanted places, as yellow do not pair up with itself. (Ok, there propably are some non-Watson Crick pairing exceptions)

Another thing:
The post above is a continuation of the older post I link to below. In that I tested the idea with the Vienna tool, while I in this one could show it with actual lab results.

Blue, green and red nucleotides in multiloop ring
8 years ago

Just a thought, but perhaps this helps justify having multiple, selectable (or tunable) energy models available in EteRNA 2.0. Right now the lab/puzzle tool calls a design "stable" if has the lowest free energy according to one single model, regardless of the narrowness of that energy advantage. But the energy model is just an estimate of what nature does, as are the other models. If we could design so that a given sequence folded to the desired target in more than one energy model, or within minor parameter tuning changes of a given model, we might help avoid designs that are only *slightly* preferring one target over another. You know, the kind of +0.1 kcal shifts that the joy of crafty puzzle makers and the bane of lab designers.
8 years ago

I asked Brourd a bit about the AveRNA tool and here is what he said:

Brourd: Anyway, in regards to AveRNA
Brourd: what it does
Brourd: is spits out the secondary structure a given sequence is predicted to fold into
Brourd: based on the energy model
Brourd: there is a CSV file for the individual structures
Brourd: containing an abbreviated name for each model, and the structure it predicts a sequence will fold into

I copied out the letter sequence from the Bends and ends sampler winner.

Centroid gets the shape for Bends and ends sampler from the winning sequence. Actually the different energy models overall do surprizingly good, though a few miss the real structure. But the overall picture were agreement on most of the structure.

As I usually check both good designs and bad designs when testing out a RNA tool, to get a feeling for how it overall does, it suddenly dawned to me that I of cause should check what I consider a hard lab, to see if there would be difference in the structure predicting abilities of the energy models. I had a strong suspicion, there would be.

Thanks Eli. It might be worth starting a Google Doc where we could track various (winning) lab designs versus the energy models to see which ones seem to get it right more often. Then we would know which ones to ignore!
2012-08-03T21:44:42+00:00

Yes, that would be nice. I remember some players earlier made an investigation on some secondary structure tools. The forum post was called How useful is structure prediction software in lab? Let's find out.

I leaned heavily on Vienna for my first long time as EteRNA gamer. But I personally ended up dumping all the RNA prediction tools I tested, as I could always make them spit out bad structures on something I knew how should look. But some of the models in AveRNA, look like they were better than the others. So knowing which is better would be good.
2012-08-03T22:11:38+00:00

Depends on the intent. Which labs are you most interested in? If you want to know what is best in middle hard designs, you should avoid the labs with pressurized designs and also the very easy and unpressured ones, like The finger lab. I would also say avoid labs with zero and few winners. It is more interesting if there is a tendency for a tool to do good with more winning sequences than with just one.
8 years ago

I looked at the top 15 results for the "Shape Test" lab using AveRNA. Shape prediction results are summarized in a Google Doc here.

So it seems that designing to get different models to agree on their predictions is *not* a guarantee of success.

Hmmm, for the top design, in 5 models, the only thing that was predicted to not fold was that single bond loop, which the EteRNAbot did not lower the energy of, in order to stabilize. If you count those 5 "near miss" predictions, the top design actually had 8 models saying it was stable. I believe that this would point more towards a disagreement in the models on how loops should be handled, when adjacent to another loop, or maybe just loops in general. As Eli said, when he ran the Kudzu lab, there was little agreement amongst the models, mainly due to the loops being adjacent, the bulges being separated by only 2 bonds, and the multiloop. Such things have to be taken into account when looking at what the predicted secondary structure will be.
8 years ago

JL, thanks for the results you shared. And nice tendency you caught, that those thee energy models that predict the highscorer to do successful also predicted the lowest scoring to be succesful.