It's getting almost impossible to find things in the original switch lab post, so I suggest we try a new conversation for each lab round.

I was at writing report on EternaBot to see if I could spot some things that could improve its score, and while I was at it, I decided to take a look at the player designs too. Basically with the same aim. :) We have done good, and I think we can do even better. So here are some things I think are worth looking out for.

I have summed up, what I think was a problem for each lab type. I hope this will be a help for understanding what can be a problem in a particular type of lab design and why.

I think if we use this knowledge, we already have very strong cards on the hand to tell what a particular FMN/MS2 switch needs, just from what its structure is. I strongly suspect that this will be applicable to other types of switches too.

Here I list what I think gives bad scores for this kind of easy labs.

I have included Brourd’s mod of Exclusion 4 in this series, as it does what the easier labs, Exclusion 2 and 3 does. Allow the switch to get locked away inside itself. I will just mention on which cases it sticks apart from the other 2.


Not needed for Brourd’s mod of Exclusion 4, as there were no excess bases. Which is actually kind of interesting given that we have been easier able to make higher scores in the other two labs that allowed space for excess bases. However this Exclusion 4 lab still do have the disadvantage of having the MS2 and FMN 1 base apart, which Exclusion 2 and 3 don’t. So I can’t say which is which.


For some reasons Brourd’s mod of Exclusion 4 takes a little more GU than the more average easy switch lab. Trends are that the harder the lab gets, the more GU. I consider this lab harder than both Exclusion 3 and 2. One of the reasons for that is that it have introduced 1 base distance between the MS2 and FMN, just as the Exclusion 1 and 4 lab has. But I think this small distance already starts makes the lab goes harder, despite it has long enough tails to knot. Fairly easy riboswitch labs takes a GU of 0-5% and sometimes up to 10%. This lab can go to 10%.

Here I list what I think gives bad scores for this particular kind of lab. and what elements are missing.

I list what I think gives bad scores for this particular kind of lab.

Exclusion 6 also benefits from a slightly more purine MS2 turnoff, compared to the more usual pyrimidine turnoff sequences. Actually it appears that this exact lab doesn’t mind the longer stretches of G’s and U’s, compared to the easier labs. The GU electronegativity and their not wanting to bind properties in especially switch designs, may be an advantage here, like oil reducing friction. To get the full design to move for making the sequence go unstuck and switching. (Penalize GU heavy regions)

Exclusion 5, tends toward being first half of the RNA pairing up with the last half and then a small slide. Example of jandersonlee’s high scoring mod of Malcolm. 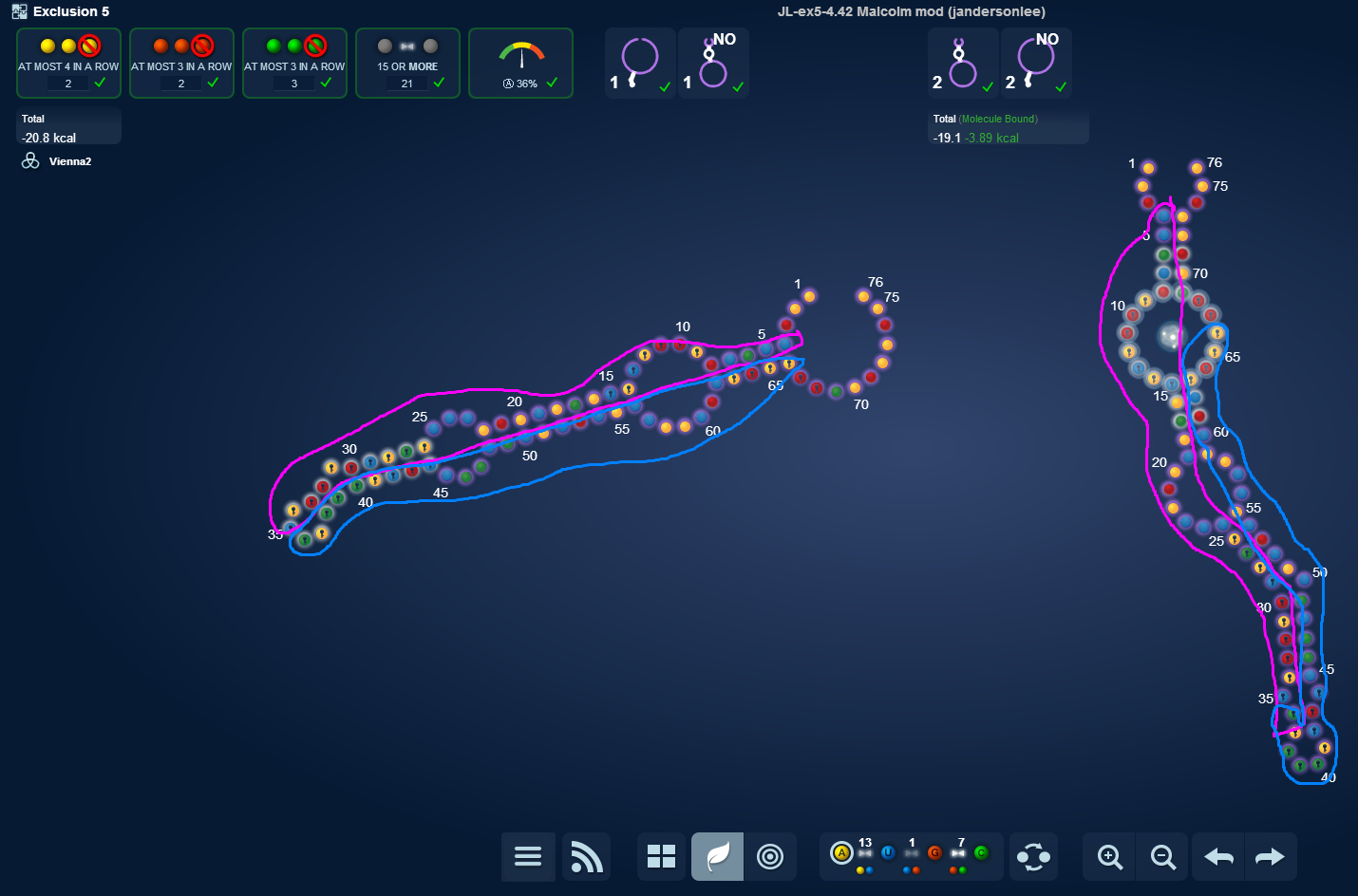 Exclusion 5 lab benefits from having 2-3 internal loops in either state.

Exclusion 6, too much of first half of the RNA pairing up with second half of the RNA. Needs to be split in two sections, that switch with each other.