IMDB prefers to have separate entries for adapted footage, like power rangers\super sentaior gojira \ godzilla king of monstersthere is gojira 1984 film, which had got the same treatment for USA and was released as godzilla 1985the imdb entry for godzilla 1985, which was released in 1985, has alternate titles for 1984 original movie. i copied those to the return of godzilla (international name) 1984 and put 1985 ones to deletion, which was rejected, despite me providing link to the 1984 movie 28 July 2019 #190728-143502-310000

Needs to be merged to this still open topic.https://getsatisfaction.com/imdb/topics/godzilla-1984-things

That may be your limited interpretation, but you were instructed by an IMDb employee to obtain the required data and post it on the other thread. You have instead posted another submission which was not what was requested. You are just slowing up the completion.Post the evidence as requested. Jaime, Employee Hi agof,Thanks for your post.There may be some clarity available via our Alternate Versions section: https://www.imdb.com/title/tt0087344/alternateversions?ref_=tt_ql_trv_5 and the movie connection of the second film you linked: https://www.imdb.com/title/tt9015178/movieconnections?ref_=tt_ql_trv_6If you believe that the US version does not warrant a separate listing please list any evidence you have to support this on this thread and we can evaluate from there.Thank you in advance.

what interpretation if the "answer" is entirely unrelated to the question, what data should i obtain to ASK A QUESTIONi ASKED A QUESTION, i didn't write ANYTHING about anything WARRANTING anythingwhat have i「'«"FAILED"»'」to gather when on the question "how to find the library" i've got an "answer" "why do you hate literacy and want to burn all the books"? which isn't even an answer but another questiondid YOU even read it?no you didn't
(Edited)
2019-07-30T07:25:19+00:00

Please post the evidence requested.They did NOT tell you to make another contribution.Making a duplicate contribution on the same title, even with new information will likely result in the same rejection.Also you have been informed to not make posts on fresh contributions before the contribution has been processed. See the processing times page and refrain from posting until a rejection has been issued.https://contribute.imdb.com/times?ref_=helpms_ch_ci_processing

Not relevant. Please don't call your fellow contributors trolls.Please comply with what the IMDb staff asks. Post your evidence on the other threadThank you
(Edited)
2019-07-30T07:38:19+00:00

If you insist on being toxic and poisoning community for movie data-base, i just won't give you the satisfaction and won't allow you to de-rail everything, like you do in other topics. I will just ignore your insults and all your posts from here on out.
(Edited)
2019-08-01T01:13:08+00:00

agof, believe me, GetSatisfaction forum has it's fair share of falme wars and trolls, as every other sie has. Ed is not one of them, though. He's concerned with IMDb in this case, even if he quickly quickly gets emotional on some issues. As you seemingly do, too.
2019-08-01T05:36:50+00:00

Ed gets into quite a few spats (the kind that escalate rather than the contrary), because of his way: in the middle case scenario, he is either playful (like with bizarre jokes) or curt (perhaps dismissive); and in the worse case scenario, he is accusatory sometimes to the point of being impolite. Nevertheless, in general, he helps streamline the Q&A process (which is increasing in bulk regularity), so we are glad for his service, as it constitutes less work for other helpers. I try avoid criticizing, because I don't want Banner to transform into Hulk, so to speak. We have seen things get out of hand before and want that to not happen anymore. We could question his informal writing style (that sometimes resembles "spam" to other people besides him), but it is not unusual. Examples of unusual would be ACT's. I've seen them both post very long copy-and-paste messages, on occasion. When seemingly provoked, Ed posts the entire GS code of conduct. That kind of stuff is mistakable for spam or worse yet plagiarism.

Moving on. We live in a sensitive world maybe, so the responsible among us have to often walk on eggshells when trying to explain to somebody why that person cannot have his or her way. Sometimes it is important to empathize or pretend to empathize. I notice that a majority of the active IMDb Champions are decent at being that way. (I was not yet visiting the forum when bluesmanSF was active, and I suspect he is a fine gentleman, but looking at his old posts, I can see there are a small few of them that are spicy, which is highly unusual for Champs.)
2019-08-01T07:50:21+00:00

and put 1985 ones to deletion, which was rejected, despite me providing link to the 1984 movie

Fair enough, agof. The agenda for this topic is completely different (or perhaps simply narrower) from the agenda for the from the previous topic, apart from the fact that both topics pertain to two or three IMDb title entries: tt9015178 and tt0087344, or those and also tt0087343. There should only be two entries, right? That should be addressed at some point. The lingering question is that of which information belongs on which page. It looks as though the matter of the misplaced Metacritic information was resolved. Was it? That just leaves the running times and also maybe the AKA titles (which is the exact focus of #190728-143502-310000), right? Well, hopefully the IMDb site authorities will get back to you on this matter (these matters), but patience is key.
2019-08-01T15:04:14+00:00

for example godzilla 1985 was never translated into russian (outside maybe pirates) so soviet title must be moved to original gojira. i did add that to gojira, but the track in OP is related to deletion of 1984 alternative title from the 1985 movie, and it was declined by editor mod, because no matter the explanation editor mods hate to delete anything even if obviously wrong. all such edits can be pushed through only by manually appealing mods on support  portal. see OP
2019-08-01T16:35:42+00:00

Regarding Godzilla, King of the Monsters! (1956), would it make more sense for the alternate title item for the Soviet Union to be replaced with an alternate title item for Russia? Unfortunately the system does not provide a "(informal Cyrillic KOI8-R title)" attribute, as suggested for implementation at https://getsatisfaction.com/imdb/topics/not-enough-aka-title-attribute-options-for-cyrillic-koi8-r-greek-iso-8859-7-and-iso-latin-2.
2019-08-02T19:11:28+00:00

the federation didn't exist until 1991, before it it was just another republic in SU and before that a part of empire

also i don't think there can be any cyrrilic name for usa remakes, because (statistically) no one ever saw them here. ru got all nipponese titles directly from there. and there was a lot of SU\JP collaborations especially in cartoons
2019-08-02T21:54:51+00:00

The Russian language alternate title listed is a literal translation of the English language title, but there is no way to convey that with the attribute options. The fact that nobody in the Soviet bloc ever saw them at the time that they were released in other parts of the world kind of would have ceased to be of any material relevance with the rise of video-on-demand and streaming services, since several years into century XXI. Consider the flip side, as how tons of Russian movies made during the Soviet era and released in the Soviet Union are available for viewing on YouTube. We have ways to supply and convey the informal literal English title on IMDb, even though the pictures were never released in the Western bloc.
2019-08-02T23:18:27+00:00

Oh, and all the poster removals were approved.
No more 1984 posters are on this title. 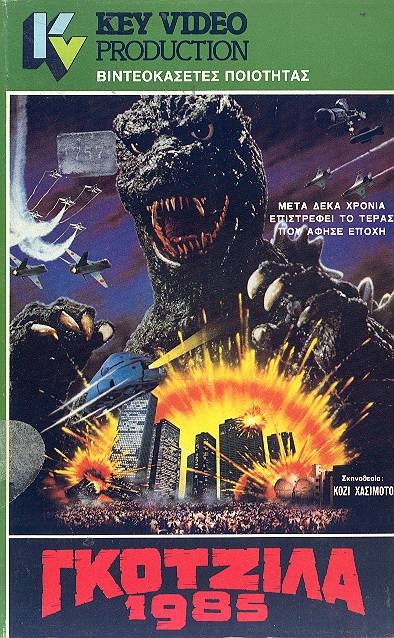 That is Greek. Cyrillic does not have a symbol that looks quite like the letter sigma, likewise with zeta. The scripts do share symbols in the capital forms of alpha, beta*, gamma (Γ versus Г), epsilon, eta*, mu, omicron, pi (Π versus П), rho, tau, phi (Φ versus Ф) and chi*, along with loosely delta (Δ versus Д) and lambda (Λ versus Л), or upsilon for that matter (Υ versus У). The "B" symbol is in Latin, Greek and Cyrillic scripts, but it has an English "V" sound in Cyrillic, and I'm unclear how "H" and "X" are pronounced in Greek, whereas they correspond respectively to English "N" and English "H". The Russian language has no "I" symbol but the Ukrainian language does.
6 months ago

Hi, agof. Thanks for pressing the issue, as Jaime did not exactly succeed at clearing up the apparent confusion. The title entries in question probably should not be merged. Instead one of the running time items should be deleted from the title entry for the 1985 version. Understand?
2019-07-30T21:37:36+00:00

I know that Jeorj. You know that too. A runtime correction needs to be done. Not a merge. As he is likely viewing a Russian AKA it may be longer or shorter. I asked him what country he was in. That way we could determine what he was seeing. Heck he may be in the US. Until he answers questions posed, and or complies with staff requests also, how is anyone expected to help!

I am in the United States and using Title Reference View. It shows me the Japan running time instead of the USA running time (which is also the default according to the submission interface). How fucked is that? We've got contributors fussing with each other when really it is IMDb that is the source of confusion.
2019-07-30T22:31:23+00:00

You sound ready for Hockey season.
6 months ago

I have submitted a correction to remove the Gojira (1984) Poster from The Return of Godzilla (1985) Title. It was approved today.
6 months ago

Also Submitted these poster deletions as they belong to Godzilla 1984. or 'The Return of Godzilla' (1984)

Contribution #190802-000247-964000 I am expecting a rejection unless someone from staff read this soon and can approve it based on the supplied info above in this post.

Thanks for submitting the edit. It was indeed rejected as there was no context for the modification. In these cases it's always best to leave an explanation linking to the GS thread so the data editors are aware of the situation when vetting the modification. I've made this change now though.

agof, you and only you make things difficult. Your description of the problem was extremely vague. It is not impossible to get anything done. I have proven that statement incorrect with my submissions here.
Now if your intentions are to completely remove Godzilla 1985 from the database.
That is incorrect.
If you wish to fix the AKA's to repair the erroneous references to the 1984 title, then make the appropriate submissions as I alluded to above.
Please stop trying to be so obstinate.
Help the staff with more clear and concise information in the future.
Your troubles here are caused by you.
And when someone tries to help you by giving you instructions so as to accomplish your goals you dismiss said help and make very bad comments at the help you are given.

Please try and be more descriptive in the future. I noticed you have another post up today that is lacking in politeness and reasoning as to what your are attempting to accomplish.
Thanks for reading this.
Cheers :):)
Ed

Just means that it is an issue for another time, right?
6 months ago

agof, I do not speak nor do I read Russian. You do.Please make the required correction submissions for those as you speak and read the language.You have made the submissions already, but we cannot see the screengrab of your submissions. You may not have or may have done it correctly. If you would provide a screengrab just like mine above, maybe we can compare your submission vs. mine. That would help IMDb Staff tremendously.ThanksEd
6 months ago

Please see this post as the above submission was wholly rejected.Thankshttps://getsatisfaction.com/imdb/topics/extra-evidence-for-submission-rejection?rfm=1&topic_subm...
6 months ago

This post should be marked solved as well.The concerns of agof about incorrect title references to The Return of Godzilla have been addressed and amended