Which among these is your favorite TV Series?List:https://www.imdb.com/list/ls087526688/

My computer skills are minimal, but unless there's some type of shortcut, the effort required to compile the data for this list must have been far beyond the norm for these polls. Kudos to you for either working your butt off, or being savvy enough to do the job efficiently.
2020-07-28T16:41:22+00:00

The leftovers too
1 week ago

Cyril Martin,This is an interesting concept for a poll. I exported your list and plotted the data.

29 out of the 35 series have a higher Episode Average than Series Rating. I've observed that fans of a series are more likely to rate individual episodes than casual viewers. Generally, the number of ratings for an individual episode is much less than the number of ratings for a series.The Pearson correlation (R-Square) is 0.0409. This is very low and indicates that Episode Averages are uncorrelated to to Series Ratings. This probably indicates that some of these shows have avid fan bases the enjoy the shows much more than casual viewers.I've uploaded the Excel file to my Google Drive in case anyone wishes to view and/or download the file. I'm allowing comments to the file. Highest Rated TV Series on IMDB by Average Episode.xlsxhttps://drive.google.com/file/d/1zZrsvCW6sJtcw_C3LQDuk1rML86u3vbU/view?ts=5f209355
1 week ago

One reason for the higher episode rating might be that I usually take the time to rate an episode only when it shines above the series' norm. If I think a series is a 7, I won't rate shows in that zone, figuring the overall score for the series suffices. But if any episode deserves a 9 or 10, I'm more likely to acknowledge it. Rarely have I thought to do it when one sucks. If many others do the same, that could account at least partially for the differential.
2020-07-29T14:44:20+00:00

My reasons:1) I don't rate episode, because I consider a series as a whole, the series is made good thanks to connections between episode not directly by the episodes.2) Rating episodes is a way to pretend that you have seen 20 000+ title without bothering to find different movies, tv shows, documentary etc. Plus, watching/rating every episode of Day of Our Lives is far less instructive for a cinephile's culture than every title with more than the 12 440 titles with more than 5000 votes.
(Edited)
1 week ago

Thank you for making the edit.
1 week ago

Great poll, if I had it my way, this would be the way to rate tv series in the IMDb, only the average of each episode vote shows the real feeling about the series as a whole. Instead of people voting on the series the same day it is released, without watching its evolution, or considering only the good seasons and not the episodes when series turn bad.Personally I rate each episode, and once the series is ended and I have seen all, I gave the tv series the average rating of all episodes, but since it is very hard to do this, I would love if the IMDb simply rated each series with the average rating of all episodes I've seen, updating it each time I rate a new episode.
1 week ago

Good poll! The results should be interesting. My favorite of these is Breaking Bad. May I suggest a small edit just for further clarification in the intro? (Added text in bold)Series that have at least an average of 200 votes on each episode and with at least 10,000 votes for the series are considered.
2020-07-30T04:48:49+00:00

Cyril Martin,It will be interesting which factor will predominate in this poll:We do not know the underlying demographics of the users who take polls and whether they are representative of IMDb users or the population as a whole. IMDb polls by their very nature suffer from self-selection bias. As such, probably do not represent the opinions of IMDb users as a whole.
2020-07-30T10:50:10+00:00

It's interesting... Dibs did one on 2010s series... I think he used overall series rating as his criterion, or possibly metacritic scores; I don't recall.

I was butthurt (and surprised) that ﻿Person Of Interest, Mr. Robot and Agents Of SHIELD ﻿ did not make the cut. Two of the three made Cyril's list though.

As of right now, BB is dominating the poll(as expected) followed by Dark and Person of Interest(I'm happy for this) respectively.
7 days ago Congratulations! This is your second HP poll!

No, someone pointed out to me that the second image is not really representative for the IMDb Home Page as it is currently implemented.
4 hours ago 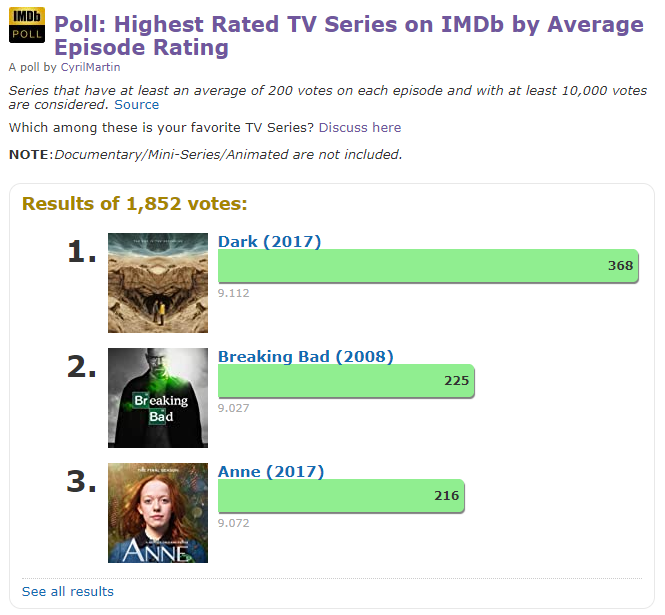 Happy to see an improvement in the homepage poll and I hope this to improve more. ('cause none of the previous HP polls crossed 1.5K votes after the latest "update.")Btw, the next homepage poll is also yours. Congratulations and Keep it up!=====But very sad to see that "Narcos" is highly undervoted.

Thanks for the info, even I'm surprised not to see Narcos to be in top 25. :(