These female actors did a quite good job on the action genre. They are icons in their own way of being a action movie star. Their movies claim cult status. No matter if it's about war, women to man/women combat, science fiction or what ever - all of them are known for their work. Which of these well trained muscle packed ladies is your lead actioner? Give us the gym results here.https://www.imdb.com/list/ls091650509/ https://www.imdb.com/poll/wVkWWXAUsz4/

Can't! You haven't made the list public
8 months ago

I would like to suggest Milla Jovovich, based on her action resume consisting of:

I've put her to the list, she's a damn good actioner! :D
8 months ago

Thank you! You might consider Lucy Liu (Kill Bill Vol.1)

She already is on the list, but thank you for suggesting. :D
8 months ago 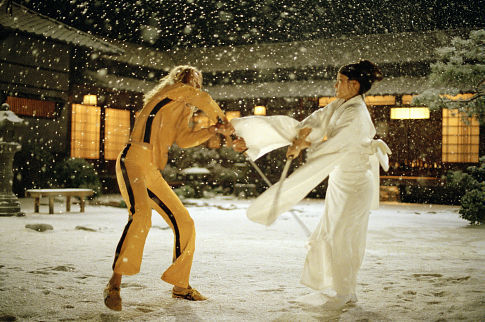 It happened simultaneously.
8 months ago

I've used an image of Mad Max: Fury Road. (before I read that)
8 months ago

Michelle Rodriguez in the 'Fast and Furious' series.

Anyway thank you for suggesting. :D
8 months ago

Zoe Saldana in Colombia, Avatar, and Guardians of the Galaxy. [ Famous for Gamora. ]

Evangeline Lilly from Hobbit and Ant-Man films.Karen Gillan from Jumanji and Guardians of the Galaxy films.
(Edited)
8 months ago

Halle Berry in John Wick 3, X-Men series, Catwoman, and many more. She also won an Oscar.

Well, 9 out of 10 suggestions were added. Not bad. And true, Anne isn't an action star.

Also, could you tell me the minimum no. of action films required for an actress to be eligible for the list?

Feel free to suggest. Like in the godfathers poll it's exact 5 movies with action roles of the action icon you want to suggest. And to avoid complications, the movie should be tagged as "action". Last days I checked many action movies in which actresses of this idea were in. But they sometimes  had no action role. Sometimes they play doctors, wifes or nurses. That wouldn't count as an action role. It wouldn't make sense.
2020-03-07T23:44:36+00:00

Bo:
Thank you for asking. :D
Movies only! Like in the male poll. ;)
8 months ago

OK, I have an idea how to make a culling...The title is Godmothers of Action, which means the list should contain either:a) actresses who had an iconic movie role which set the standard for future female action heroes, even if they didn't do much action in their careers, such as Linda Hamilton or Sigourney Weaver. orb) actresses whose body of work contains a high number of action films, such as Cynthia Rothrock or Milla JovovichThe term GODFATHER (aside from its original religious meaning), also means:a man who is influential or pioneering in a movement or organization.Your Godfathers of Action list is a good example of that - the youngest one is Tony Jaa, with 43 years of age!Sure, guys like Chris4 (i.e. Hemsworth, Evans, Pratt, Pine) are good examples of modern action heroes, but they are not ''godfathers''.What I want to say, I would remove the younger actresses from this list, or the ones who just recently had a famous action role.
(Edited)
8 months ago

Thank you all for making yourself soo much thoughts at this issue.All in all mihailo.razvigor has understood what I intended with the godfather list.That's exactly what this list is made for. Now we have thrown as many as can fem fighters in the ring. But when you look at the top of the list,you can see that there are 2 women that really deserve the honor. I've put them there for an example.And there are surely a few more on the list, who can claim to be anfemale action icon. Such as the mentioned Sigourney Weaver, Jovovich,Gina Carano, Carrie-Ann-Moss, etc. When we want equal rights, thesame filtering of candidates has to be made on the female list. Just lookat the godfather-list. Only 26 candidates. There is a reason why. :D
8 months ago

Hope yours does better than mine! Or maybe its too close. I Dunno?https://www.imdb.com/poll/XoDA7xb_kQ8/results?ref_=po_sr

I think they're pretty different. Yours asks about the best photo, whereas this one asks about favorite actor in action movies.
6 months ago

The list is at 36 actresses currently, the maximum is 35
5 months ago

'Good list of good characters and actors. I would have never been able to think of that many. Bravo. : )
5 months ago

Thanks, Breu. We noticed that you didn't provide text for the options like you did with the "Godfathers" poll so we wanted to give you a chance to do that if you wanted to. Perhaps just leave a little note when you consider this to be finished.

Of course, ruby. :D
I can do that, including the title change "The International ..." and of course the other issues. The mere problem might be that I have to put some options down, because it might be, that not all of them had 5 action movies. It will need some days - I got a lot of work at work and some work at home.
5 months ago

'Just a few small suggested edits:These female actors did quite a good job in the action genre. They are icons in their own way of being an action movie star. Their movies claim cult status. No matter if it's about war, women to man/women combat, science fiction or what ever - all of them are known for their work. Which of these well trained muscle packed ladies is your lead actioner? Give us the gym results here.I also suggest cutting  "Their movies claim cult status" because many of the movies are too widely popular to be considered "cult."
2020-03-03T02:37:54+00:00

It's about the actresses in their function as action movie stars ---> The actress!But I have to change something, Ruby wrote up there a day ago. We want to make the two polls equal in style, so it needs a few days to do it, because I have a lack of time at the moment. The  godfathers poll looks like that:https://www.imdb.com/poll/__GvueT6o0I/